In the second of our blog posts for Breast Cancer Awareness month, we turn the spotlight on Nape Matlala, who lost her mother to the disease in 2009. The years-long ordeal has made her a serious advocate for early detection and treatment. 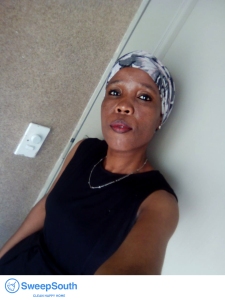 When Nape’s mother fell ill in 2005, she went straight to a doctor and received treatment, but not for cancer. When she didn’t get better, she went to another doctor, who suspected she might have cancer but also failed to produce a diagnosis.

It wasn’t until 2008 that it was confirmed that Nape’s mom had breast cancer.

“She had her left breast removed in August the same year and we thought she was doing fine until the cancer returned in June the following year,” says Nape. “This time around it was a different kind of cancer which spread through the whole body and not even chemo could help”.

At the time, Nape was working a full-time job and worrying about her mother – as well not being able to spend time with her, this started to affect her performance.

When the company relocated, she was left jobless.

Looking back, Nape feels that if she’d been able to be more flexible with her working hours, then she would’ve been able to enjoy more time with her mother when she needed it most.

“With a nine-to-five job we could only spend weekends together,” she says. “My siblings and I also took turns to accompany her to the hospital for treatments, so when it was my turn, that would be additional time spent with her, but it wasn’t even really that much”.

One thing that Nape has taken out of her mother’s ordeal is the need for early detection and treatment.

“I just wish that we could have known sooner that it was cancer,” she says. “My mom was a very sick person in general so it never raised any alarm bells that she could have cancer.

“I’d advise everyone to just go and do their mammograms or pap smears – it’s so important and beneficial for your health.”